What is a Prop Bet?

A prop bet, short for a proposition bet, is an exotic bet on an occurrence or non-occurrence not directly affecting the fight’s final outcome, as opposed to a match bet on who will win the fight. Prop bets usually focus on event stats, like number of points awarded, method of victory and other occurrences not necessarily related to the winner of the bout.

While matchup betting is by far the most common way to bet on UFC, prop bets offer knowledgeable bettors extremely favorable odds and the chance at tremendous profits. 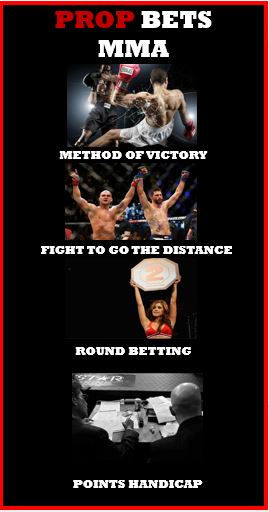 While some sportsbooks offer a variety of UFC prop bets, these are by far the most popular with bettors:

Method of Victory. This is a bet based on how the fight will end for a particular fighter. KO/TKO, Submission or Decision. An example could be Anderson Silva to win by Submission on his next fight.

Make sure to read fighter statistics to know how he usually wins fights, this prop bet is fairly easy to use. Both ESPN Go, MMA (source 1) and the UFC official statistical site (source 2) offer great insights on fighter data. The UFC uses FightMetric data, the best MMA statistical provider which breaks down fighter profiles by record statistics and skill breakdown.

Fight to Go the Distance. A very easy prop bet to understand. Will the fight cover the entire length of rounds with no KO/TKO or submission? Most top fighters liquidate their opponents rather fast, so consider this prop bets with lower category fighters that are still shy on the ring.

Remember the boxing fight between Pacquiao vs Mayweather? Two of the world’s greatest who barely damaged each other and went the distance. Bettors could have predicted this by understanding it was all a commercial setup for sponsors, not a real fight. How to bet on boxing is very similar to MMA.

Round Betting. A fairly difficult prop bet, you can either decide on which round the fight will end, or even more challenging, determine which fighter will win and on what the round.

This bet is almost completely left to chance, unless you have a deep knowledge of a fighter’s trend to end things on a specific round. Trends in statistics will be your main tool here. Round Betting can also be taken through live MMA bets, it is much easier to determine along the fight how it could end.

Points Handicap. This is a type of over/under prop bet. For example, you can bet on Silva 3.5 points handicap. This means that when the judge’s scores are combined Silva would need to win 4 or more rounds to win the bet. The main reason sportsbooks set the point handicap on an uneven number is to avoid “push” or a tie.

Handicap betting is the same as the point spread, a common bet term in american sports betting.

FOTN stands for “Fighter of the Night”, which consists of three awards given by the UFC:

– Knockout of the Night (KOTN)

– Submission of the night (SOTN)

– Fight of the Night (FOTN)

Bettors familiar with the styles and histories of the fighters can take advantage of the long odds by betting on the winners of these awards. We can expect fighters on the rise to win.

Fight of the Night. Fairly straightforward. After each event, one fight is selected as the night’s best. Every fight is eligible, including undercard fights, which means that there are a large number of options per show. This is good option for experienced bettors, since it stretches the odds on every fight. Odds can range from around +400 to higher than +1000. It’s worth noting that, generally, the main event generates by far the most action, which adds even more value to betting on other fights. 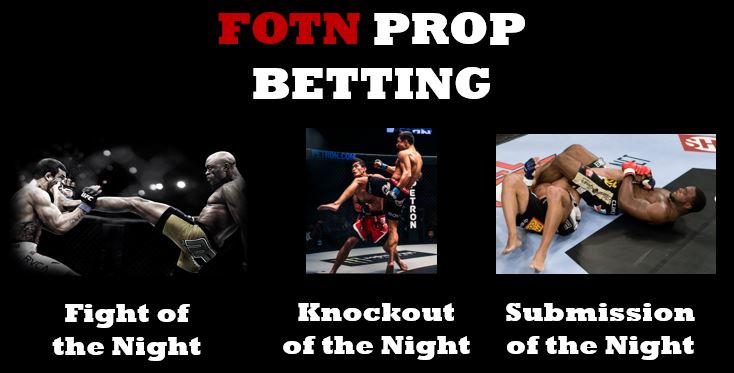 Knockout of the Night. Knockout of the Night is one of the trickier awards to pick, as so many fights end on one-punch knockouts at unexpected times. With odds starting at +500, though, the right pick can produce a great payout. It’s valuable to look at not only which fighters have a lot of knockout wins, but at which fighters on the card have a history of being knocked out.

Submission of the Night. Submission of the Night is traditionally the easiest of the three post-fight awards to pick. Nearly every fighter has a chance to land a lucky punch and score a big knockout, but the number of fighters proficient in finishing fights with submissions is much smaller.

Similarly, it is much easier to pick out the fighters who, historically, have shown poor submission defense. With a much more limited pool to choose from and odds in the +500 to +1500 range, Submission of the Night offers a great value proposition to educated bettors.

There are a lot more MMA betting types smart bettors can take advantage of. Be sure to check them all.

Obviously, a prop bet is a higher-risk/higher-reward wager than betting on the winner of a single fight. You are betting at long odds for the chance of high payout. Risk-averse gamblers who aren’t willing to bet long odds for a big prize should remember that making multiple prop bets on the same show is a great way to safely make money. Sometimes sportsbooks forbid more than one bet on the same event, so more than one account with different sites is recommended.

For instance, if the odds for Submission of the Night are around +500, and you make three bets, a win by any of the three fighters you selected will yield +200 in return. When you consider that odds on these prop bets can go as high as +1500, an educated series of bets can be a near-guarantee of a sizable return.